Last week I managed to complete another skeleton warrior unit for the Analogue Painting Challenge.  As with the previous units, I'll be adding metal command figures in the near future. 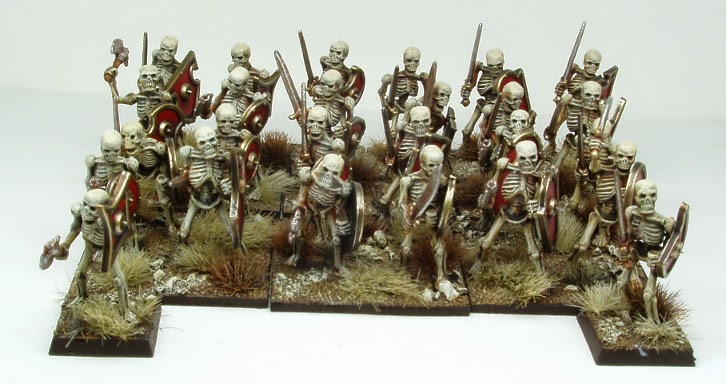 I'm getting a little more consistent with the shading washes and I'm also finding that I'm getting the figures completed a lot quicker now.  I'm using Rotring Brown ink mixed with Chaos Black paint as the basis for the washes. 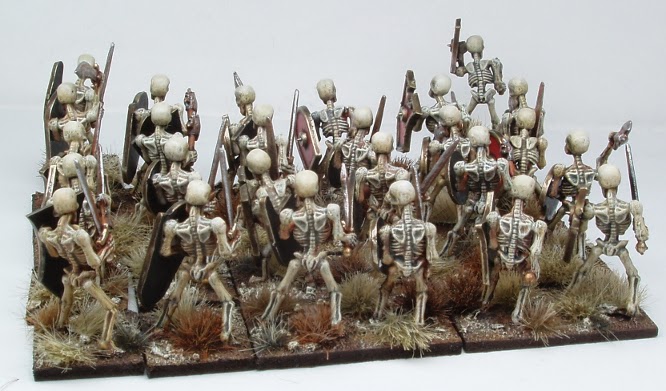 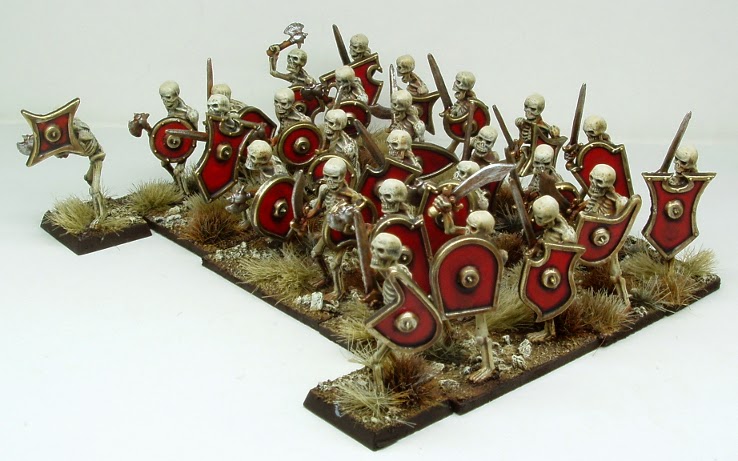 I've included a picture of the army below.  The unit on the left has the extra highlight on the shields, the one on the right doesn't.  Which do you prefer?

Next up will be a unit of skeleton cavalry with hand weapons and shields.

Whilst I was suffering from Flu last weekend I decided to use the time to sort through all my old Citadel paints and transfer them to dropper bottles.  Most of the opened ones were sadly unusable so ended up in the bin.  Luckily, I bought quite a few of the old box sets when the paints were changed over to the hexagonal pots in the 90's.  All of these paints were still in perfect condition and easily poured into the dropper bottles without any sign of lumps or residue, and GW claim the new paints are an improvement. 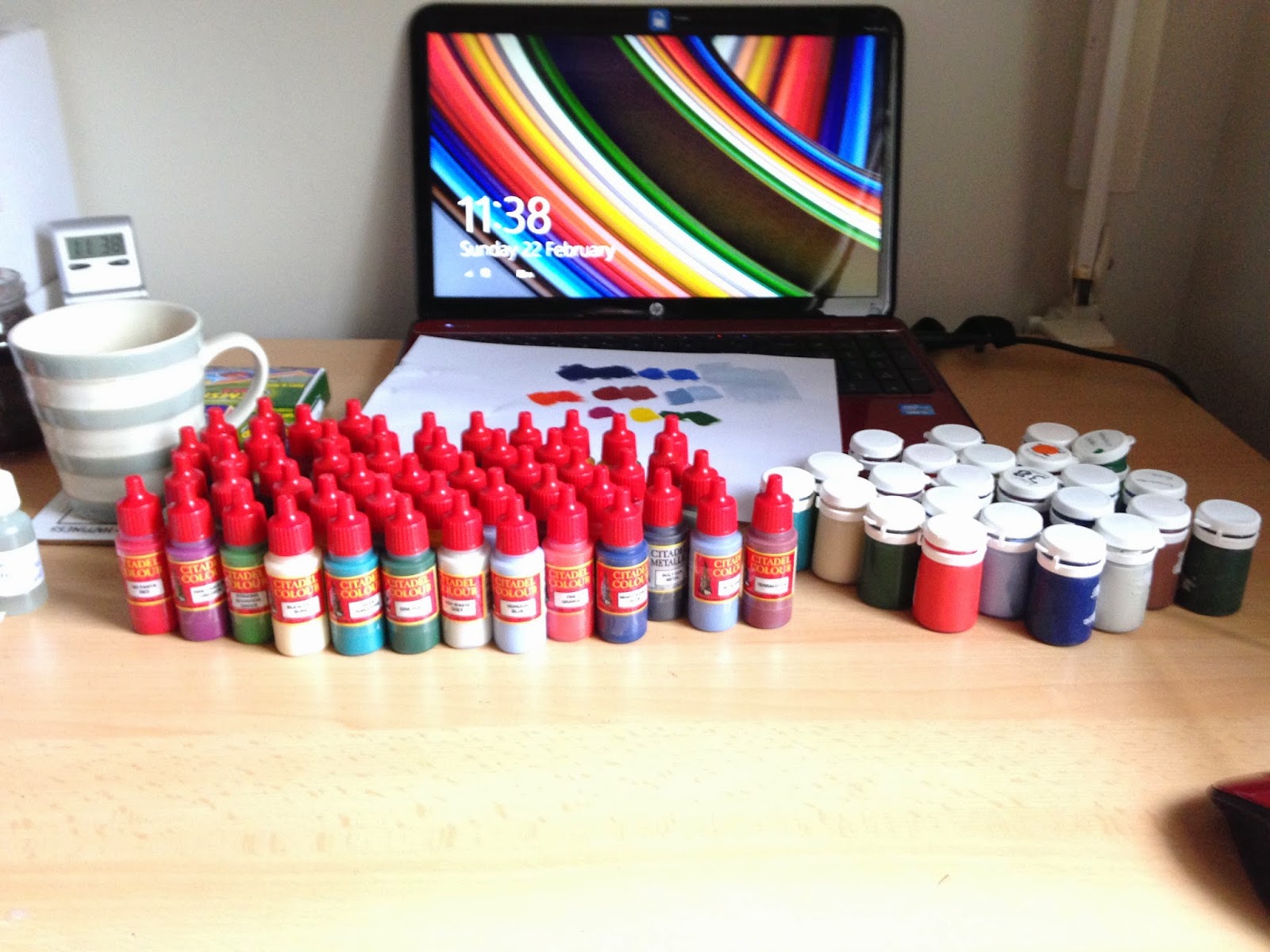 So, as you can see above I'm now the proud owner of a complete set of 1980's Citadel paints all safely stored in dropper bottles.  This was a real trip down memory lane as the smell of the paints took back thirty years to when I returned from the shops with the Colour and Monster paint sets, some brushes and a box of the Warhammer Fantasy Regiments.

I'm looking forward to using these on some old figures over the next few months.
Posted by Peter at 09:07 5 comments:

This weeks challenge entry was a unit of 26 skeleton warriors armed with hand weapons and shields.  As with the Grim Reapers the command element will be added later using metal figures.  I've also managed to paint 12 figures for the second unit so these should be finished next week. 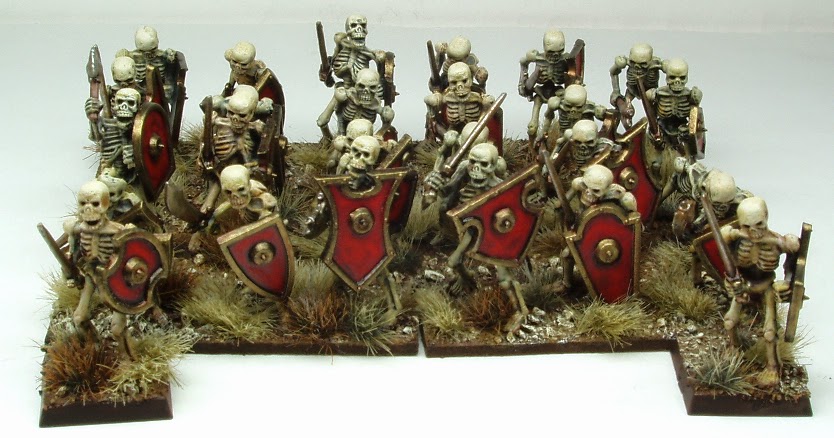 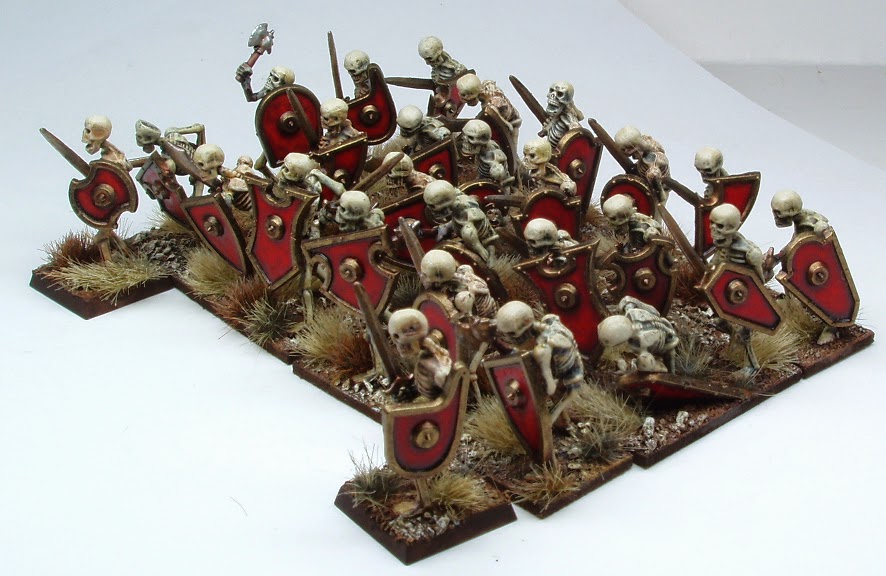 I decided to go with a red and bronze aged look for the shields as these colours complement the bone of the skeletons quite nicely.  The red was a real pain as the coverage of the old 'Blood Red' paint is not very good.  In the end I mixed some Blood Red with White and painted the shields pink initially and then went over them again with the red. A wash of Rotring brown ink followed by Blood Red highlights completed the look I was after. 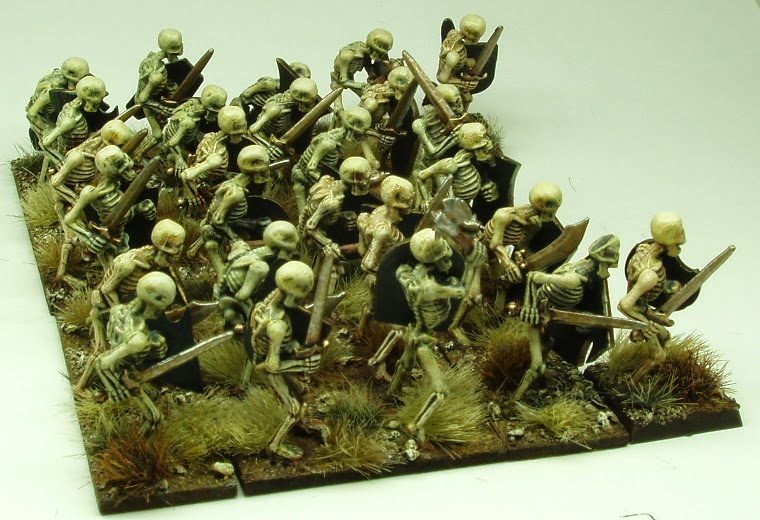 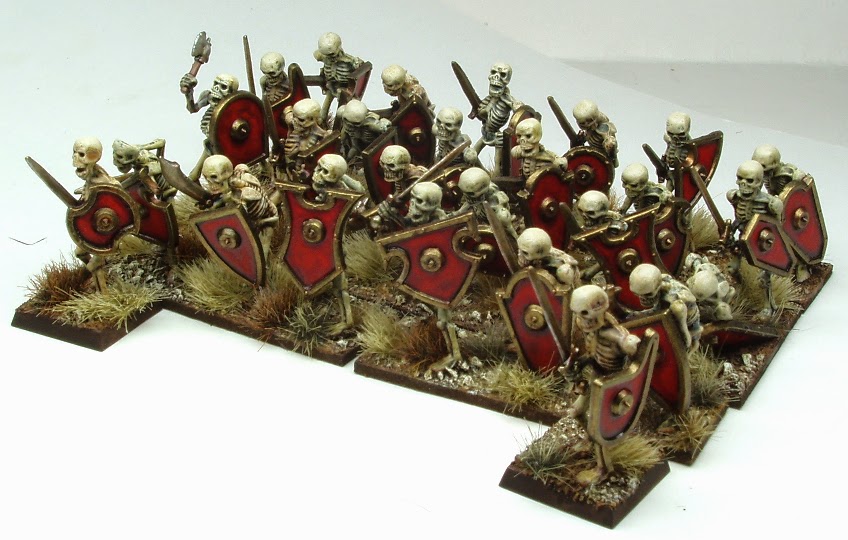 Finally a couple of pictures of the completed figures so far, they're already starting to look like an army.

Next up will be another unit of Skeleton Warriors.

Its been a while since I posted on here.  In order to get back into painting I've been taking part in the Analogue Hobbies Painting Challenge.  This is a friendly competition where everyone commits to painting a number of points worth of miniatures between early December and late March.  I've committed to painting 1,000 points split between 6mm Napoleonics and 28mm 'Oldhammer'.

I've just posted the following on my main blog - Comes Britanniae.  I'll add a more in depth update on this site over the next few days.  I'll also start to include army shots after each submission so that you can see how the army grows over time:


I always planned to paint a number of 28mm figures as part of the competition, I brought forward the start of these as I'm spending so much time away from home during the week and need something light to transport and relatively simple to paint.

I have a load of old Citadel figures and paints from the 1980's that I'd like to get painted over the next few years.  This started during the revival of Warhammer Fantasy 3rd edition or 'Oldhammer' as it's now been called.  I have hundreds of the plastic skeletons and had always wanted to paint up an undead army. I planned to start this a couple of years ago but never got much beyond designing an army and undercoating a few skeleton cavalry figures.

Given that the undead are light and do not need too many paints, I've decided to try and paint as many rank and file skeletons as I can before the competition ends.  I'm restricting myself to the original citadel paints for the figures as I still have all of these and they are still useable after nearly thirty years.  I will be using modern day tufts for the bases though as these are so nice compared to old static grass.

I started painting the skeletons a couple of weeks and submitted a couple of units to the Analogue Challenge last week.

I painted up 10 archers initially as I wanted a small number of figures to practice painting bone.  I like how these turned out.

Next up was 20 Grim Reapers, skeletons armed with two handed scythes.  I'm really pleased with the way the wooden handles turned out. 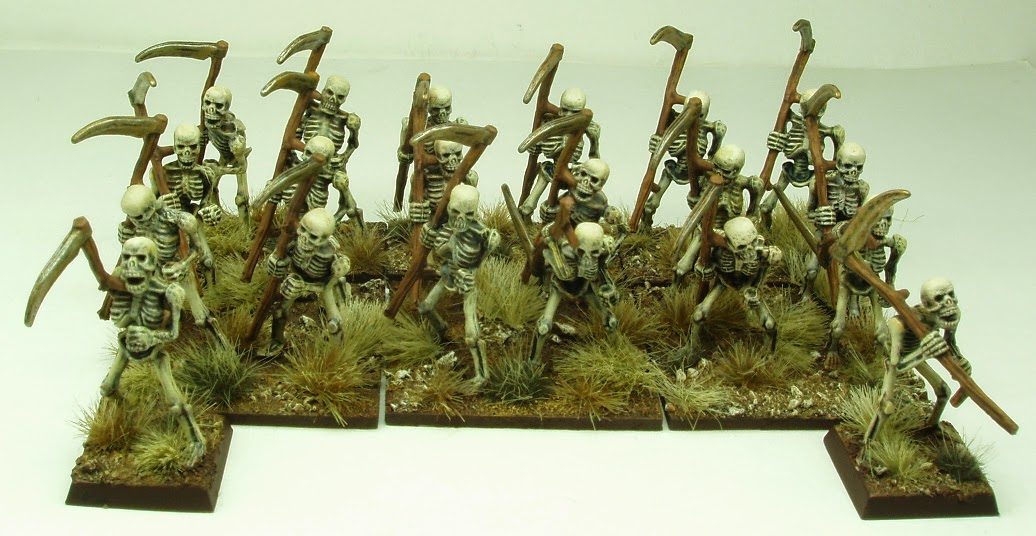 The bases consist of three different colored tufts highlighted with Miniature Paints Cream.  I chose these colours as I want the vegetation to look like it has had the life sucked out of it by the Undead forces as they advance.  I think this has worked out quite nicely. 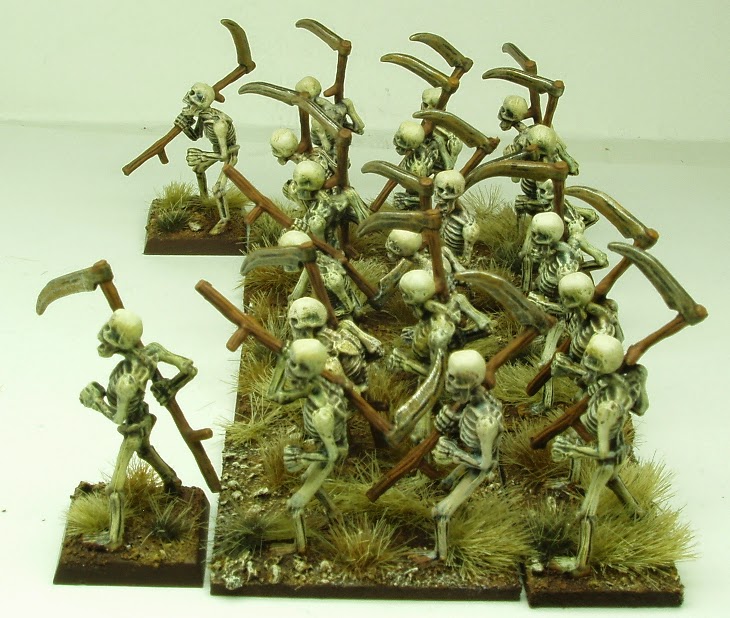 I've really enjoyed painting these figures, it took me back to when I first started painting and had to experiment with paint mixes to get the colours I wanted as there weren't too many shades around initially. 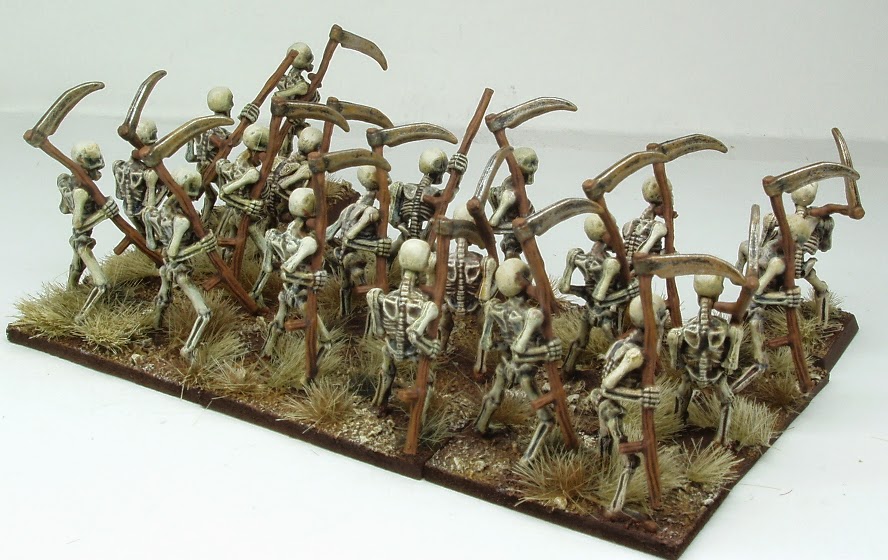 I should be able to complete another skeleton unit before next Thursday, I have 14 figures already complete so only need another 12.
Posted by Peter at 06:19 14 comments: 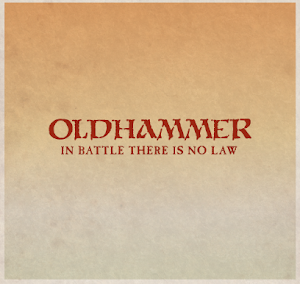 Peter
I've been painting wargaming figures sporadically for 20 years now and as a result my painting skills haven't really improved that much. Looking around my cupboards and shelves a few weeks ago I counted 14 unfinished projects of various sizes and decided to start focussing on 2 or 3 projects until they are complete. This Blog is an attempt to keep myself on track, develop my army painting skills and publish my progress for anyone who is interested in reading it.